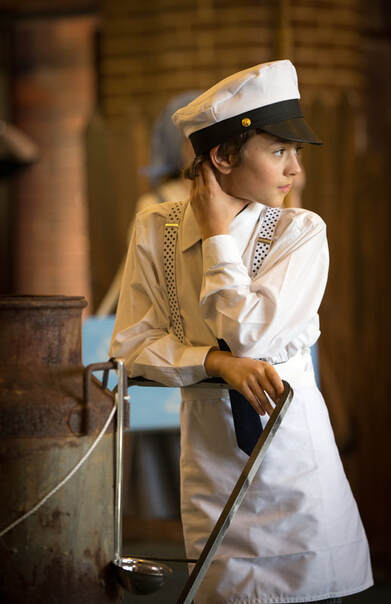 Eden Levit as The Milkman
2014 marked the 70th anniversary of the final performance of Brundibar, the children’s opera written by Hans Krasa, which was performed 55 times in Theresienstadt (Terezín), the Nazi concentration camp set up as a way station to Auschwitz for Czech Jews during World War II.

The project provided a rare opportunity to stage this work, never before seen in Sydney and to mark this important anniversary.

It provided an innovative way to engage school students in a cultural activity often seen as elite - the genre of opera, as well as providing students with a high level of artistic experience and an education experience which enhanced their understanding of Jewish history.

The children’s cast of 40 worked with Holocaust survivors from the Terezín Ghetto, professional music staff as well as a young adult cast, who mentored the young singers.

Review quotes:
‘As a whole, the performance was a touching tribute to what the human spirit is capable of in the direst of circumstances’. (David Larkin, BachTrack, 16 August 2014)

‘The artlessness of the children’s performance was complemented by a highly professional orchestra, with Deborah de Graaff (on clarinet) and Owen Morris (on trumpet) producing a particularly mellow and pleasing tone’. (David Larkin, BachTrack, 16 August 2014)

‘The audience warmed to what was a very unique performance’. (David Kary, Sydney Arts Guide, 18 August 2014)